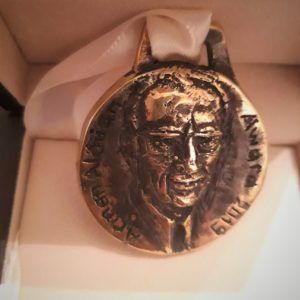 In 2014 AEA named the main annual award in honour of the 100th anniversary of one of the greatest Armenian economists of the XX century – Armen Alchian. Armen Alchian established UCLA tradition in Economics, wrote very few but extremely influential articles, wrote a university textbook that educated generations, saw many editions and are still currently in use by top universities, and was expected by many to win a Nobel Prize.

The Alchian Award comes in the form of a medal to be hung on the neck and has been designed by twin brother artists known under the unifying name Jevo (twins in the dialect of Gyumri). On the averse a characteristic portrait of Armen Alchian is presented.