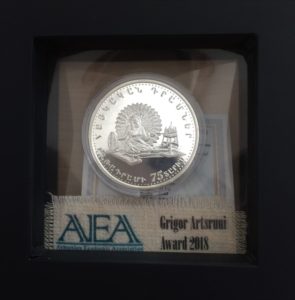 Grigor Artsruni Award is given to the most promising young economist under the age of 33, as identified by the presentations during the meetings. Grigor Artsruni was one of the few learned economists (PhD in Political Economy, University of Heidelberg) who devoted their life to the betterment of the society

The Award comes in the form of a cased commemorative coin in an exhibition panel. The silver coin was minted in 1994to commemorate the 75th anniversary of the first currency (known as the Spindle) of the Republic of Armenia.